Are all religions basically the same? 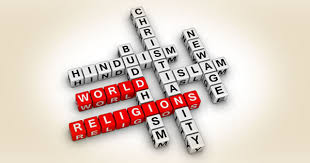 Are those who say that all religions are basically the same right or wrong?

Mahatma Gandhi of India once said: “The soul of religion is one, but it is encased in a multitude of forms.”

Is this true or false?

“In reality, there is only one religion, the religion of God. This one religion is continually evolving, and each particular religious system represents a stage in the evolution of the whole,” claims the Bahá’í faith on its official Web site at bahai.org. Are the Bahá’ís correct or incorrect?

What about the Hindus? “In whatever way men approach Me, even so do I go to them.” —quoted from the Hindu scripture by Swami Chidananda of Divine Life Society.

Is Christianity’s claim of uniqueness and exclusivity misleading and baseless? Or is it necessarily true?

Even a cursory examination of comparative beliefs and data quickly reveals that different religions make very different truth claims on a number of even basic issues. And they do so in a definitive manner. In other words, as any knowledgeable student of comparative religions will tell you, every religion—not just Christianity—claims exclusivity. Here are a few examples:

Regarding the nature of God:

“Jesus is unique among religious leaders in claiming to bring God to our world in His own person and making good that claim by such powerful evidences.” Green says that no other spiritual leader or teacher but Jesus Christ…

…ever claimed to bring God to man

…dealt radically with our wickedness

…broke the final barrier of death

…offers to “live inside” His followers

Apologist and author, C.S. Lewis said that when it comes to the categorical claims of Jesus Christ regarding His Divinity…

There is no half-way house, and there is no parallel in other religions. If you had gone to Buddha and asked him, ‘Are you the son of Brahah?’ he would have said, ‘My son, you are still in the vale of illusion.’

If you had gone to Socrates and asked, ‘Are you Zeus?’ he would have laughed at you.

If you had gone to Muhammad and asked, ‘Are you Allah?’ he would first have rent his clothes and then cut off your head.”

Christian — real moral trespass and condition of indebtedness before a holy, infinite-personal God

Regarding Christ’s crucifixion and Resurrection

Christian — a gift of God’s grace

Islam — only by observing the five Pillars

Again, Dr. Michael Green writes: “Perhaps the greatest difference of all [among religious views] lies in the Christian assertion that none of us can save ourselves and make ourselves acceptable to God, try as we may: all the other faiths assert that by keeping their teachings a person will be saved, fulfilled or reborn.”

All religions are not the same — Biblical Christianity is absolutely unique among all the religions and philosophies of mankind. Its claim to be necessary for salvation is based squarely on the uniquely powerful evidences for its truth and finality. Actually, true Christianity is not a religion, but a person, Jesus Christ. “By Him, and for Him, were all things created” (note Colossians 1:16-17).

Thus, Christianity is unique in the following fundamental respects, among many others.

Only in the Bible is God revealed as the one eternal, personal Creator, who brought the entire universe into existence by His own Word. All other religions start with the material universe as the only eternal reality, with their “gods” being essentially personifications of the natural forces which develop the universe into its present form.

On the other hand, the Creator-God of the Bible has all power and is Himself, therefore, not only the One who created the universe but also the One who establishes the basis for human salvation.

Christianity alone is centered in the historical events associated with a Person—the birth, death, resurrection, and imminent, glorious return of Jesus Christ. Other religions are invariably based on the teachings, rather than the acts, of their founders.

Jesus Christ alone, of all men in history, has conquered man’s greatest enemy—death.

The founders of other religions are all dead and their tombs venerated. The tomb of Christ is empty, and His bodily resurrection from the grave is the best proved fact of all history. The fact that He alone could overcome death demonstrates that He alone has all power. He Himself said,

All other religions of the world are fundamentally just one religion—one of salvation by works. Each religion sets up a particular set of religious rites, of commands and restrictions, and of ethical principles to follow, and then teaches that if a man does these things he will be saved. The human origin of each of these systems is indicated by the fact that each is humanly attainable.

The Bible, however, sets its moral and ethical standard as the very holiness and perfection of God Himself, and demands nothing less than this for salvation. Obviously, no man would invent a standard which was utterly impossible for any man to keep.

Christ alone offers salvation by grace alone, to be received only through faith in Him. To the one who truly believes on Him, He then gives through the Holy Spirit a new nature, enabling that one to live a life pleasing to God.

There is no mere “religion” in all the world like this. Jesus Christ is the world’s Creator, and its only true Redeemer. “Neither is there salvation in any other; for there is none other name under heaven, given among men, whereby we must be saved” (Acts 4:12).

The Bible Has the Answer book
by Henry Morris, Ph.D, and Martin E. Clark
The Bible has the answers to the most important questions of life, and this book reveals what it says about more than 150 of those questions! Includes answers to some of the most difficult doctrines of Scripture. Authors: Henry Morris and Martin Clark, adapted from their book The Bible Has the Answer, published by Master Books. Copyright © 1995, Master Books, All Rights Reserved – except as noted on attached “Usage and Copyright” page that grants ChristianAnswers.Net users generous rights for putting this page to work in their homes, personal witnessing, churches and schools.